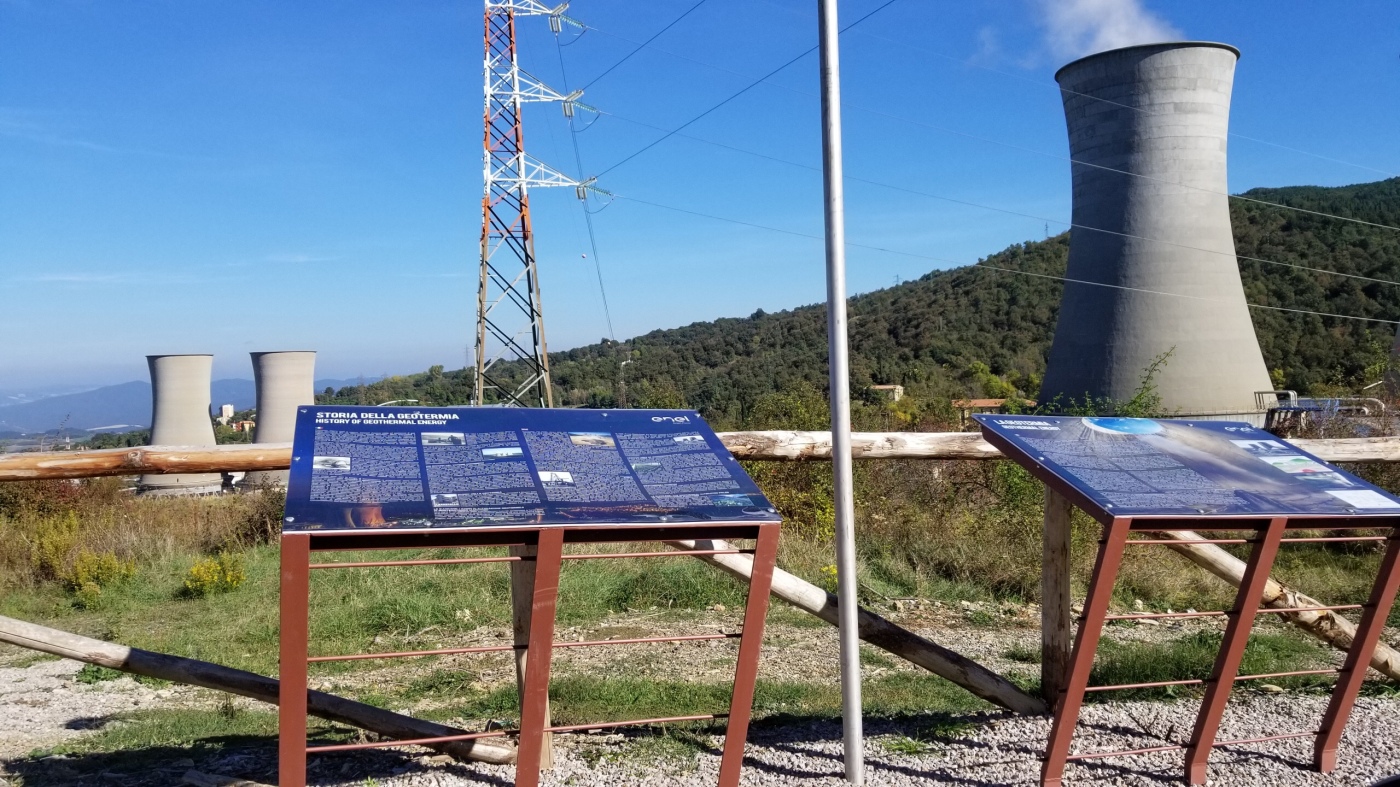 We left Tuscany on a beautify sunny morning in late October. We decided to take the scenic route back to Rome, before we left Italy the next day. After two month of visiting all of the hills and valleys of the Golden Triangle that is Pisa, Sienna and Florence we thought we had become quite knowledgeable in all things Tuscan.

It was a beautiful drive. The autumn blue sky over green, beige and red hills seduced us at every turn and I can’t tell you how many times we pulled over to capture one last fantastic view shot. Even Volterra still had a few good poses left in her.

In Pomarance, about 2 hours into our journey, we spotted flutes of white smoke in the distant hills. As we climbed closer, we noticed large cement chimneys – similar to those of nuclear reactors we have seen at home.

Much to our amazement, the discoveries of Italy were not to be all about history, art, architecture, and gastronomy. Well, well well. My friends, it seems that Italy has been dabbling in geo thermic energy for the last 100 years.

What we thought were nuclear installations were in fact geo thermal stations, converting the heat from the hot earth below. You are most likely to find geothermal plants in areas where there are hot springs, geysers and volcanoes because that is where the Earth is at its hottest. Italy is a volcanically active country, containing the only active volcanoes in Europe. This and its geology, make it extremely conducive to producing this type of energy.

I believe I mentioned in previous posts (or maybe not) that Tuscany is also known for its therapeutic hot springs and pools (slightly sulpherous and salty) having medicinal benefits. Logically, one would tap into those hot waters for other purposes.

Apparently, Italy was the first to test geothermal power – in 1904 in Larderello (where we were) and was the only nation producing this form of energy until 1958. A considerable employer today, the town produces 10% of the worlds entire supply of geothermic energy. There are in fact, 33 geothermal plants in Tuscany – in the provinces of Pisa, Siena and Grosseto. We looked for the Museo della Geothermia but after driving around, without success and noses burning from the sulphuric gases (rotten egg smell), we resigned ourselves to what we would find on the internet.

By the time we reached Rome, our heads and bodies were tired from the journey, filled with new knowledge, and discoveries – including the last stretch amidst flatlands, agriculture and sea views – and in need of a rest from the drive.

I needed an extra day, to be able to put into words how once again Italy had impressed us , and convey to you how we spent our last day in Italy. Conclusion: we will need to return, for Italy had not had its last word.