Let me take you back to the summer of 2019. The air is warm, people are out and about and you are sitting out, possibly enjoying a refreshing beverage, listening to the sounds around you. You hear the birds of course, maybe a light breeze rustling through the trees and general murmurs and clatter people going about their business in the neighbourhood.

Then, disrupting the familiar sights and sounds of your surroundings is a rather loud, unusual buzzing coming from above. Unusual because its uncommon, and sporadic. You look up to the sky’s, and see that the source of the drone is actually a biplane flying above the city skies.

If it was July 26th, and you were indeed sitting outside a cafe in Ottawa and heard the biplane flying above, then you would have been part of a memorable day for Pierre and one of his friends. Because on that day, at 11am, my husband was checking something off his bucket list.

A few years ago, he discovered that one could take a ride in an open-cockpit vintage aircraft over and around Ottawa and this year, he was finally able to take that ride.

For those who are aviation enthusiasts, I can tell you that the flying machine was a black and red Waco UPF-7, built around 1939. It holds up to two passengers per flight, and you need to wear a helmet and goggles, because it is an open-air cockpit. There is also a weight limit to take into account, adding up the weight of both passengers if you are two taking the flight.

He’s always been adventurous and wanted to experience what it was like to ride the skies in one of the early flying machines, feeling the wind around him as he travelled along the picturesque Ottawa River. I am adventurous, but not in that way. I have never been a fan of Ferris wheels, roller coasters or anything suspending me in mid air. Thankfully, a friend was willing to have this once-in-a-lifetime experience with him.

After a quick hand shake with the pilot and getting a few instructions, they took their seat up front and the pilot sat behind them. The propellor engines roared and warmed up and the take off was quick and loud as they headed for the skies. Because they were flying at a low altitude he could see clearly below the key landmarks and familiar attractions as they flew over Parliament Hill and downtown Ottawa. Its not a quiet ride as you can imagine, with roaring propellers buzzing each side of you.

After a surprisingly smooth landing, they were back on the ground 15 minutes later at Canada’s Aviation and Space Museum, snapping pictures of themselves with the plane and the pilot to remember the moment. 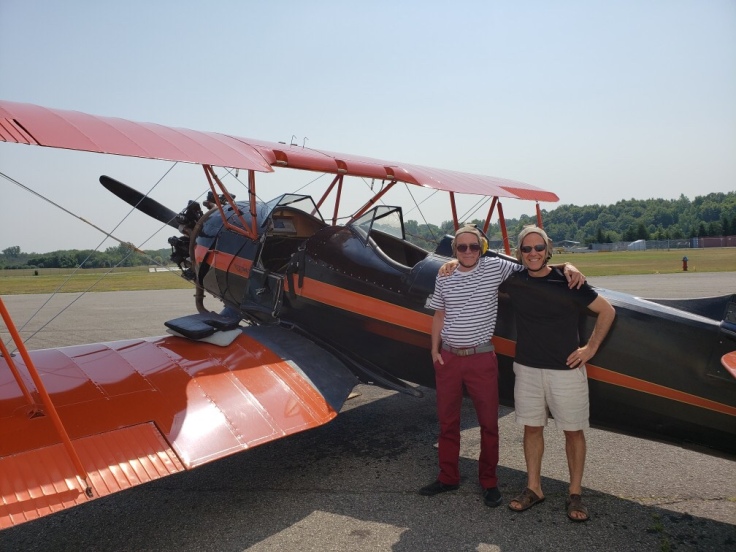 Life is short and our time here is a gift. Seize the moment when you can!